October 21, 2009 By Pete Warden in Uncategorized Leave a comment 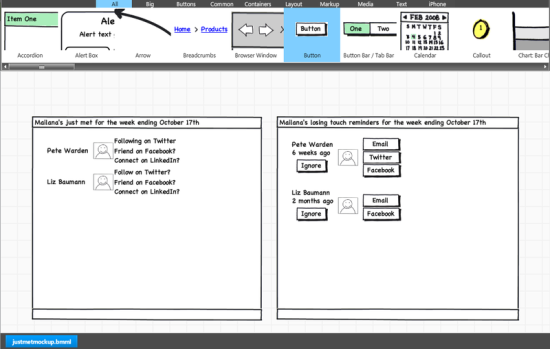 Mock me mercilessly, I deserve it, but I've really been struggling to prototype on paper before I code. Back at Apple there was always a white-board handy and a bunch of colleagues and customer-surrogates I had to collaborate with on any feature, so I did plenty of documentation before doing any serious engineering. As a lone founder, it's seriously tempting to think I have a good enough picture in my head to just go ahead and try it out.

Wrong, wrong, wrong! For one thing I end up involving users way too late in the process, since it takes a whole bunch of coding effort before I can show them something. Even ignoring that, I've never thought things through as completely as I think I have. Just a few minutes trying to sketch out the result I'm trying to achieve will always show me something I'd missed, and that's a lot cheaper than spending hours of programming to get to the same conclusion.

One of my mental blocks to prototyping is that I couldn't find a method I felt comfortable with. I'd tried the Pencil Sketch Firefox plugin, but it just didn't work the way I wanted. OmniGraffle is fantastic for creating beautiful diagrams, but it's painful to build something that looks like a UI sketch out of it's primitives. I've fallen back to using pen and paper, but it's really hard to alter and evolve hard copy, and you have to scan it in to share it remotely. Finally I tried out Balsamiq last week, and I'm in love.

I could rhapsodize about its ease of use, but the single best feature is that it looks like a sketch. This visual metaphor is really important, it clearly marks the results out as conceptual designs, not detailed blue-prints. This stops both other people and myself from focusing on nit-picking the look-and-feel, and forces a focus on the big questions about content and placement. I don't spend hours obsessing about aligning elements, because they naturally look a bit wonky, so I'm freed to think about what the overall content should be.

You can give it a try for yourself with the online version, and the full desktop product is $79, though I got it for $40 with a Techstars discount. If you're at all involved in product development, I think you'll end up buying it too.