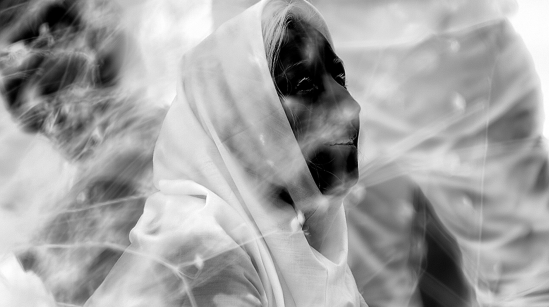 When I went to SF MoMA over the holiday break I didn’t have a plan for what I wanted to see, but as soon as I saw the first photos of Richard Mosse’s Incoming exhibition I knew where I’d be spending most of my time. His work documents the European refugee crisis in a way I’ve never seen before. The innovation is that he’s using infrared and nightsight cameras designed for surveillance to document the lives and deaths of the people involved, on all sides. The work on show is a set of large stills, and a fifty minute film without narration. I highly encourage you to check out the exhibition yourself, and I’ll be going back to the museum for an artist talk tomorrow (Saturday January 11th at 2pm), but I wanted to share a few thoughts on why I found it so powerful, partly just to help myself understand why it had such an emotional impact on me.

The representation of the scenes is recognizable, but the nightsight makes them different enough that they broke through my familiarity with all the similar images I’ve seen in the news. It forced me to study the pictures in a new way to understand them, they live in an uncanny valley between abstract renders and timeworn visual cliches, and that made them seem much closer to my own life in a strange way. I couldn’t fit what I was seeing into the easy categories I guess I’ve developed of “bad things happening somewhere far away”. 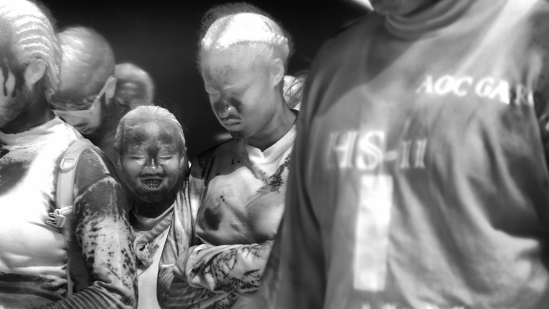 I realized that I rely on a lot of visual cues to understand the status and importance of people in images like these, and most of those were washed away by the camera rendering. I couldn’t tell what race people were, or even if they were wearing uniforms or civilian clothes, and I realized that I reach for those markers to make sense of images like these. Without those, I was forced to look at the subjects as people rather than just members of a category. I was a bit shocked at how jarring it was to lose that shorthand, and found myself searching for other clues to make up for my loss. Where does the woman in the cover image above come from? I can guess she’s a refugee from the shawl, but I can’t tell much else. My first guess when I saw the photo above is that it was migrants, but the caption told me these were actually crew members of a navy vessel.

It forced me to confront why I have such a need to categorize people to understand the stories. Part of it feels like an attempt to convince myself their predicament couldn’t happen to me or those I love, which is a lot easier if I can slot them into an “other” category 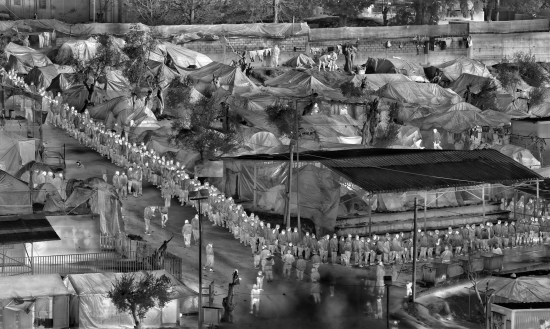 A lot of the images are taken from a long distance away using an extreme zoom, or stitched together from panoramas. On a practical level this gives Mosse access to sites that he couldn’t reach, by shooting from nearby hills or shorelines, but it also affects the way I found myself looking at the scenes. The wide shots (like the refugee camp used for the cover of richardmosse.com) give you a god-like view, it’s almost isometric like old-school simulation games. I was able to study the layout in a way that felt voyeuristic, but brought the reality home in a way that normal imagery couldn’t have done. There are also closeups that feel intrusive, like paparazzi, but capture situations which normal filmmakers would never be able to, like refugees being loaded onto a navy boat. Everybody seems focused on their actions, working as if they’re unobserved, which adds an edge of reality to the scenes I’m not used to. 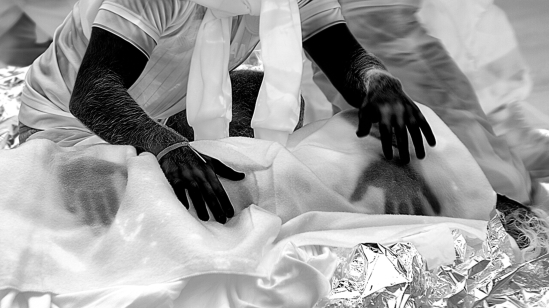 Capturing the heat signatures of the objects and people in the scene brings home aspects of the experience that normal photography can’t. One of the scenes that affected me most in the film was seeing a man care for an injured person wrapped in a blanket. The detail that was heartbreaking was that you can see his handprints as marks of warmth as he pats and hugs the victim, and watch as they slowly fade. Handprints show up on the sides of inflatables too, where people tried to climb in. You can also see the dark splashes of frigid seawater as the refugees and crew struggle in a harsh environment, the sharpness of the contrast made me want to shiver as it brought home how cold and uncomfortable everyone had to be.

I can’t properly convey how powerful the exhibition is in words, I just hope this post might encourage some more people to check out Mosse’s work for themselves. The technical innovations alone make this a remarkable project (and I expect to see many other filmmakers influenced by his techniques in the future) but he uses his tools to bring a unfolding tragedy back in the spotlight in a way that only art can do. I can’t say it any better than he does himself in the show’s statement:

Light is visible heat. Light fades. Heat grows cold. People’s attention drifts. Media attention dwindles. Compassion is eventually exhausted. How do we find a way, as photographers and as storytellers, to continue to shed light on the refugee crisis, and to keep the heat on these urgent narratives of human displacement?