June 30, 2010 By Pete Warden in Uncategorized Leave a comment 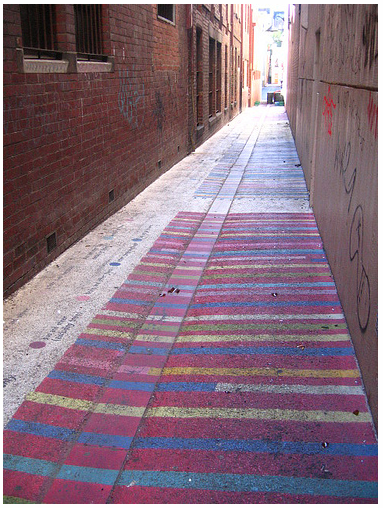 Email Data Source – These guys had a cunning idea – listen in to commercial mailing lists by subscribing to them. They then analyze all of the data they gather to build a detailed picture of different industries and companies email marketing. It surprised me at first, but a lot of the companies I talk find their email lists are their most effective marketing channels despite their distinct lack of trendiness, so I'm pleased to see someone innovating around them.

Brien Lane, Melbourne – This Australian alley has been covered with charts representing real demographic information from the area. I love seeing visualization like this out in the real world, it makes me want to visit. Here's some more photos.

Clue is a renewable resource – This reminds me so much of my experiences at Apple. I spent over a year battling their legal department to honor an agreement we'd made when I joined, to allow me to just fix bugs in the same open-source project that had got me hired. A good friend spent a lot longer trying to get them to sign off on an Objective C mode he'd built for Emacs, and as far as I know still hasn't succeeded in releasing that simple config into the wild with the company's blessing. And Apple is actually one of the good guys when it comes to open-source, so I can only imagine what some other places must be like.

Chartbeat for the ChatRoulette site – I've been using Chartbeat on one of my own sites recently, but actually seeing it running on a site with serious numbers of visitors makes its power a lot clearer.

Official Seattle crime map – While it's nowhere near as slick as others like the San Francisco Crimespotting map, I'm impressed to see a city government produce one of these for themselves. Hopefully more official bodies will see the advantages of making data available in an easy-to-use form like this.