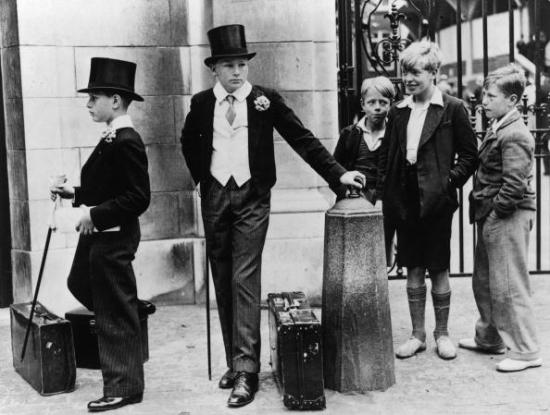 I recently read a meditation on this iconic photo, and it got me thinking about how the British class system affected my life.

For most of my childhood, I wasn't aware of class at all. My mum was a nurse on night shifts and my dad worked in a chemical factory, but by getting a degree through night-school when we were growing up, rose to a position as a trained chemist. Looking back I'm amazed at how my parents raised three kids on their income, and while I noticed some of my school friends had bigger houses or their parents had two cars, I never felt any gap between us because of that.

The change came when I was 16 and started at Hills Road Sixth Form College. The British system gives kids a choice of where to do the last two years of high school, and Hills Road boasted amazing exam scores. I was incredibly geeky even then, so I leapt at the chance for more challenging lessons. By the end of the two years, I'd come to dread the place.
I started in 'Double maths', which was an advanced course that squeezed two A-levels worth of material into the normal time allotted for one. Looking around the class of 20, it soon became apparent that 15 of them already knew each other, and had already been taught a lot of the material. I soon realized that they'd come from the posh Perse private school, and that Hills Road was attractive because spending their last two years there let them qualify as state school pupils for the admission quotas for Oxford and Cambridge universities.
Not only were they blowing me out of the water academically, they were bursting with self-confidence and always had a put-down to hand. I was already going through a stormy adolescence, and spending time in their presence left me feeling awful, like the 'oik' they considered me. I dropped out of double maths after a couple of terms, but never felt like I truly fitted in, in any of my classes.

It left me resentful, and I started to notice class a lot more. A neighbor who'd attended a private school got a well-paying job 'in the city' at 18, despite terrible exam results. From my perspective as I was stacking shelves at Tesco supermarket, that didn't seem right. After I got my degree and started working in the games industry, I noticed how even at such high-tech companies management often came from posh backgrounds. Managing seemed more like a class privilege than something you earned by experience. I looked around at people on TV, politicians and journalists and noticed how many of them seemed to come from the same class.

I ended up working closely with a few private school kids and got to know them pretty well. They seemed twisted by the system too, forced to show an outwards confidence that was fragile, and left with a fear that their achievements might be more to do with connections than ability.
It affected me too; I had a chip on my shoulder, and I didn't like the sort of person I was becoming. I didn't want to spend the rest of my life either nursing a grudge, or climbing the social ladder. I was learning to be happy with who I was, and I just wanted to go through life with people accepting me for my abilities, not judging me by my accent.

In the summer between finishing Hills Road and starting university, I spent three months in a tree-house in Alaska. That's a whole different story, but what stuck with me was how people judged me. They were a lot more interested in what I could do than who my parents were. It was like a breath of fresh air being asked to honestly prove my abilities, and the memory of that summer stuck with me as I toiled back in the UK. I pushed myself hard to get the sort of specialized experience that was in demand in America.

Finally, after 5 years of learning everything I could about game console graphics, I took a job in the US. I told myself I'd just try it for 6 months, but pretty quickly I knew I couldn't go back, there were opportunities I could never dream of at home. I'm not naive, there's plenty of 'old boys networks' over here (the greek system springs to mind), but they're fragmented and in competition with each other. There's nothing as dominant or closed as the British system, they all have to be open to newcomers or they quickly lose relevance.

I didn't leave Britain because I hated toffs, but because I hated dealing with the issue at all. Both alternatives, grudge-holding or social-climbing, meant burning massive amounts of energy on something completely unproductive, and I wouldn't like the person either would make me become. I love America because it's given me the freedom to get things done without wasting my time on class.