March 21, 2010 By Pete Warden in Uncategorized Leave a comment

There's some great PHP libraries out there for handling OAuth and the Twitter API, but I never found a simple example showing how to handle the user interface side. It's a bit of a pain because you have to send the user away from your site and then deal with their return at some later time.

After I implemented my own workflow for this (on top of Abraham William's Twitter library), I thought it would be useful to strip it down to a template that other people could reuse. I've put the code up as github.com/petewarden/twitteroauthexample and you can try it for yourself at web.mailana.com/labs/twitteroauthexample.

It creates an authorization link for users to click on, and handles retrieving their access tokens when they return from Twitter. In a real application you'd want to store all the information in a database, but to simplify the code I'm keeping the tokens in session variables. To get it running on your own server: 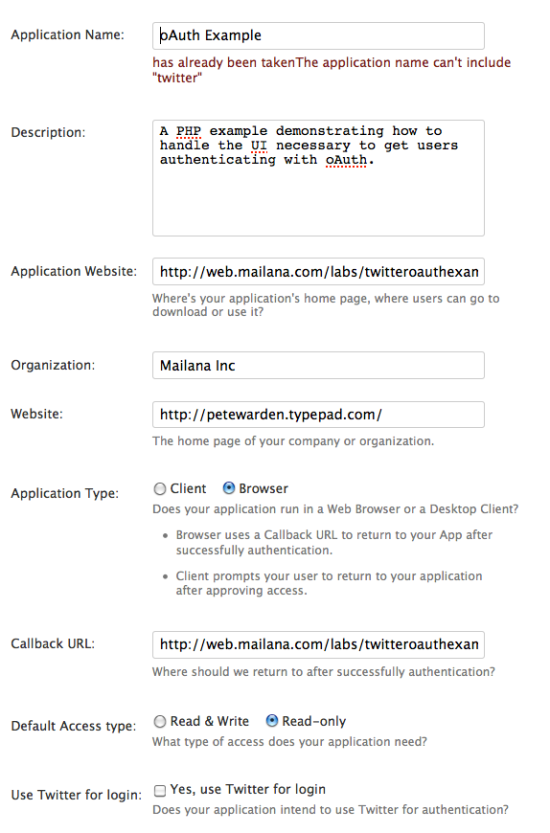 Go to http://twitter.com/oauth_clients, click on 'Register an application' and fill out the form. You'll need to make sure the Callback URL field points back to the place you're going to put the example code. In my case, this is http://web.mailana.com/labs/twitteroauthexample/

Copy the code up to your web server, and then you should have a working process for authorizing access to the Twitter API.