September 9, 2008 By Pete Warden in Uncategorized Leave a comment 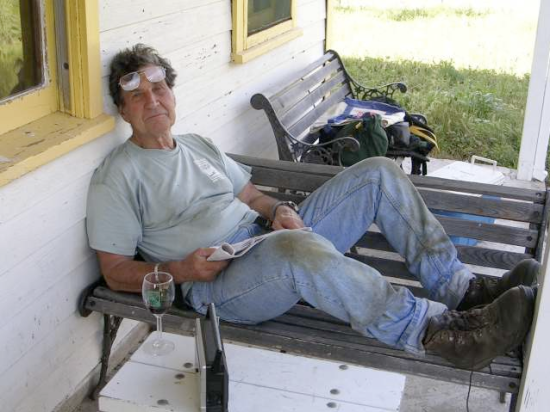 I’ve known Al Bandel for many years, and I was deeply saddened to hear he’d died on Sunday. He was passionate about trailwork, not only going to most scheduled work-days, but even organizing his own expeditions out to the Channel Islands, where he was well-known and well-loved.

I always looked forward to seeing him, he was a live wire, always full of stories about his life both recent and from when he was a young man. I particularly remember his tussles with big consumer firms, where he was unfailing polite but determined to get what he was promised. He never took himself too seriously, and loved to tell of the day he bought some cans of Guinness, and discovered there was something rattling at the bottom of the first can he drank. Worried there was a foreign object contaminating it, he phoned up their customer service line, who explained it was just the widget that gave it an on-tap fizz. He was full of apologies once he understood, but the girl on the other end insisted on sending him a free 6-pack, no doubt as charmed by him as we all were!

The photo above is from a 2006 trailwork trip we took with Al to Santa Cruz Island. After a hard day’s work, he loved to crack open a bottle of wine and cook up something wonderful. Me and Liz soon learnt to pack less food ourselves on these expeditions, because Al was sure to make enough for all of us, and roll his eyes if he saw us heating up anything pre-made. "It only takes a minute to make something from scratch!" You can tell from his clothes in that picture that he worked just as hard during the day, usually leaving the rest of the party panting while he powered on.

He specialized in the really heavy work, never happier than when he was dragging a boulder into place for a step, or dragging a post-pounder up the side of a mountain to set in a sign. He built to last, always digging the deepest hole and finding the heaviest rocks. He was a keen-eyed and good-natured collaborator, always vocal ("What did you go and do that for?!?") but ready to listen and compromise.

I’m going to miss him a lot, his determination, his laughter, and his spirit of fun. Life was never dull when Al was nearby, and everyone who knew him loved him. I’ve put together a memorial page up for the Trails Council website, and his family have asked that instead of flowers, people donate to the SMMTC if they want to remember him.