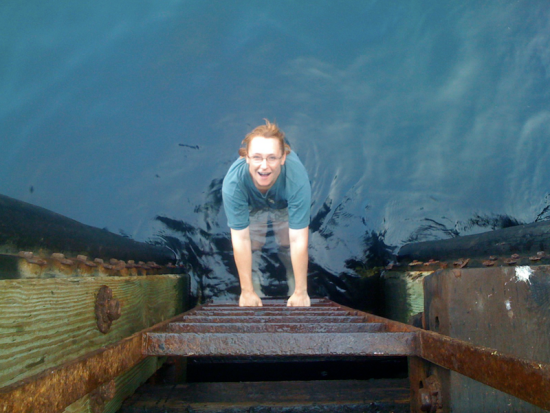 Me, Liz, and two friends spent Saturday night camping on Anacapa Island, just off the LA coast. It’s a small place, and I was pretty nervous we’d be bored out of our minds. When our friends phoned to book their boat trip with Island Packers, the lady taking their order was incredulous that they wanted to camp there; "Have you been before? People don’t go back there twice." There’s less than a mile of trails over the whole island, no trees or shrubs, just thousands of seagulls nesting, with all the noise and mess you’d expect. 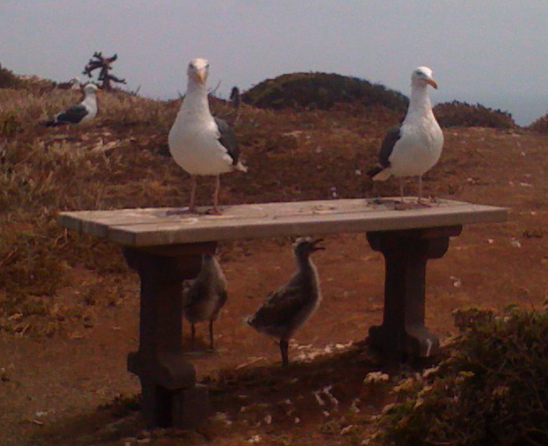 The boat ride across took less than an hour, with the local dolphins putting on a great show. As we got closer, we could see the sheer cliffs that completely surround the island, and the famous rock arch on the tip. 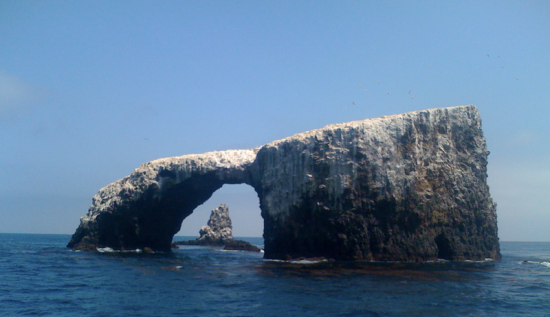 The trails may be short, but getting onto the island from the boat is a workout, with 150 stairs from the dock straight up the cliff. There’s no water at the campground, so our rucksacks were heavy as we packed all we needed up the iron stairwell. 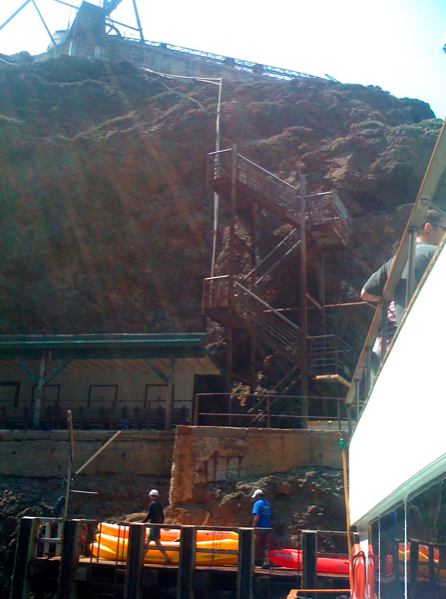 After a quick talk from the ranger, we headed the half-mile to the campground. There were no assigned spots, though you do need to make reservations ahead of time. There’s only 7 spots in the center of the island. Be careful, there’s a couple of places with numbered posts on the way that look like camping spots, but we saw rangers move two different groups on from them while we were there. Here’s the maps and descriptions of the different spots. We took number 7, without realizing it was designed for a single tent. We fit both of our 2-man tents in, but it was very cosy.

There isn’t much privacy at the campground, since there’s no shelter, but spots 6 and 7 were a little bit tucked away. They were also close to the cliff-top overlooking a view down the whole island, and into the sea below.

Once we’d got our tents set up and settled in, the moment of truth arrived and we had to find something to do. The loop around the clifftops kept leading to some amazing overlooks, so we spent several hours staring down through the crystal-clear ocean, watching the sealions doing loops around the scuba divers exploring the reefs and kelp forests. We were al jealous of the divers, I could see why Jacques Cousteau considered the Channel Islands the best temperate diving in the world. We wanted to take a swim too, but with sheer cliffs all around, it seemed impossible. Luckily Liz came to the rescue, and figured out we could take a dip off the dock. You can see her sliding into the water at the top of the post. You’re allowed to swim here, but you’ll need to be very careful since there’s not much margin for error. The conditions were perfect for the four of us, with 64 degree water, flat as a lake with amazing visibility.

After the swim, we were ready for bed. The ranger had warned us that the gulls and foghorn would keep us awake, but we slept well until the dawn chorus kicked in. Despite all my misgivings, it turned out to be a great trip for all of us. The best word for the place is ‘wild’, you know you’re on the edge of the world, but there’s so much life all around you. I wouldn’t want to live on Anacapa, but it’s a great place for an adventure.