July 4, 2008 By Pete Warden in Uncategorized Leave a comment

Yesterday was my last day as an Apple engineer. Deciding to leave was one of the toughest choices I’ve ever had to make, I’ve never seen such a dedicated and motivated team, and I’m certain that the hits will keep on coming. More than that, I’ll miss sharing my daily life with all the colleagues who became friends over the last 5 years. I have to single out my boss, Guido Hucking. He contacted me initially based purely on my open-source image processing work, hired me despite the hassles of sorting out a work visa, gave me the independence and support I needed to get things done, and then arranged for the office to close at 3:00pm on my last day so we could all head down the local British pub! 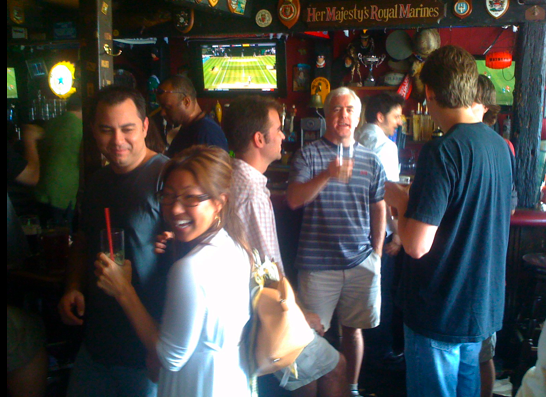 I’m looking forward to the future, I’m going to be building my email ideas into a real product, but I’m always going to look back very fondly on my time at Apple. You can be sure I’ll be cheering on the Apple crew as they keep up their tradition of excellence. Here’s what I’m leaving behind:

I’ll miss bumping into Nathalie holding her tea, killing kobolds with JF P, debugging memory leaks with JF D, hearing tales of the OS world from JP, sitting in Martin’s comfy chair while we tried to find a nice fix to a nasty bug, thinking ‘What would Greg N do?’ on design questions, biking up hell hill with Angus, Richard S’s non-stop chatter, Fernando’s heroic wrestling with the build system, Brian’s willingness to dive into scary parts of the build system, Darrin for being so relentless with the filter bugs, Sid’s tube map and other great test footage, Bob’s ability to explain any C++ question, Charles’ tales of his bike commute across LA, Stephen’s calmness in the face of any bug, Greg A’s ability to skewer my thinking when I got sloppy, chatting with Eric B about hiking , having a fellow game refugee in Jed, Gavin’s desk-pounding and loud swearing late at night, Doug’s wizardry with model helicopters, Jake’s powered bike, Omid’s ability to rip out the nastiest code and turn it into a unit test, talking with Richard P about the Illuminati, the way Gilbert’s projects could always break my code, Nigel’s emergency tea stash, (even though I never used it, it comforted me that it was there), Eric’s hair, Jayson and Pam’s pony-sized dog, the feeling of dread whenever I got a bug from Shin, because I knew she would have narrowed it down so precisely there was no escape, Steve’s patience as he tried to track me down to ask questions, Pete W’s ability to thrive in 3-hour-long spec meetings, Amanda’s knowledge of Better Off Dead, Enrique’s own CSI movie, Johanne’s literary adventures, Chris N’s encyclopedic knowledge of OpenGL that helped him to tell us exactly how we were messing it up as clients, Mike L’s Red Setters and WoW, Ken’s incisive questions, Gio’s drive to Get Things Done, Garret’s explanations of color science that even I could understand, running into Andrew in the garage, Steph M’s cat-herding with the schedule, Steph’s keeping the whole office purring along smoothly, Jeffy’s incredible PvP tales, Chris Bentley persuading ATI to take us out to a Red Sox game, Paul S being able to make progress even with my cruftiest filter code, Robin’s patience when doing the same with the templates, Sheila’s cheer-leading for the team, hearing Greg W’s stories of biking across the US, and David A for taking the time to give me the low-down on funding as an ex-VC.

There’s hundreds more people there who’ve touched my life, I’m sorry if I missed you out. I just want to say a big thank you to everyone, especially for being amazingly supportive of my decision to strike out on my own and leave them to deal with all my bugs!