February 10, 2008 By Pete Warden in Uncategorized Leave a comment 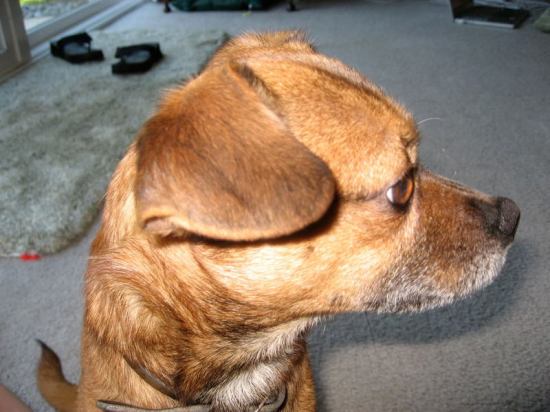 A few weeks ago, me and Liz decided to dip our toes in the water of dog ownership, and temporarily foster a dog for a local rescue charity. As our friends gleefully predicted, we didn’t have the willpower to hand over our first case and ended permanently adopting him!

Thor is a 13 pound half Chihuahua, half maybe-Pinscher. We don’t know much of his history, but he’s about four years old, seems to have been well brought up judging from his behavior, and is very affectionate. Though I’ve been surrounded by cats for the last ten years, I grew up with dogs but this is Liz’s first exposure. She’s smitten, helped by Thor’s surprising fastidiousness, as the only dog I’ve met who avoids muddy puddles. He’s also a very strong hiker, still pulling at the end of a 5 mile loop with serious elevation gain.

I have no idea where his name came from, I’d love to know how a half-Chihuahua ended up named after a Norse god. To my mind he’s more of a Loki, but no point in giving him an identity crisis now. My parents are overjoyed, understandably they always preferred the dogs to us children, and now they have a furry grandson.

The only downside is the cats’ reaction, they are decidedly unimpressed by this new interloper. He’s very terrier-like, so we’ve had to train him not to chase the fun furry toys as they scamper away. Luckily they all seem to slowly be reaching an understanding, maybe in a few more weeks they’ll relax a bit more.