January 10, 2008 By Pete Warden in Outlook API Leave a comment 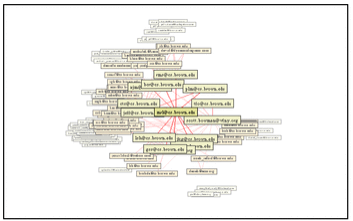 MIT is the Kevin Bacon of the web research world. It’s hard to investigate any bleeding-edge topic without bumping into one of their projects. For example Piggy Bank is one of the earliest attempts to build the semantic web from the bottom up, and now I’ve discovered their work with Social Network Fragments. Danah Boyd collaborated with Jeffrey Potter and his BuddyGraph project to explore how to derive interesting social graphs from someone’s email messages.

The app they show is somewhat similar to Outlook Graph. They’re using a wire and spring simulation system to produce the graphs and trying to derive some idea of what the underlying social groups are based on the positions that people end up in the network. They haven’t released a demo of the tool unfortunately, it appears that it involves more pre-processing than OG, but does have an interface for exploring changes over time, which is not something I’ve implemented yet. They don’t appear to be using any kind of weighting for the connections between people based on frequency of contact. It also requires some additional inputs from the user for things such as email lists and the user’s own email identities, and I’d imagine the system assumes a fairly clean set of email without too many automated or junk messages to muddy the data, though they can discard ‘isolated’ nodes that only have a few connections.

Here’s a short demo video showing BuddyGraph in action. The project page doesn’t seem to have been updated for a few years, so I’ll email Danah and Jeffrey to see if they’ve done anything interesting in this area since then.