January 6, 2008 By Pete Warden in Personal Leave a comment 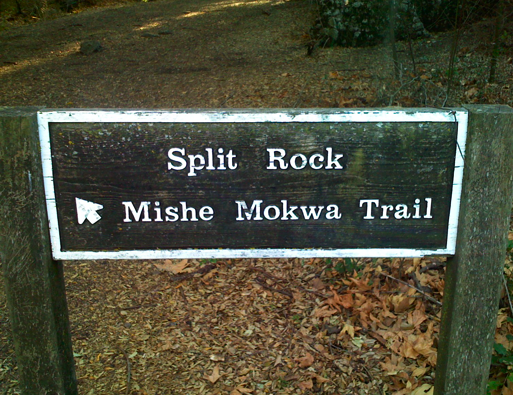 Sandstone Peak is the tallest peak in the Santa Monicas, at 3,111 feet. There’s a really sweet 6 mile loop you can hike to reach the top. It’s one of my all-time favorite trails thanks to its unique scenery. Here’s a map, and below I’ll cover what else you need to know. One other great feature of this trail is that it’s entirely on National Park land, who allow leashed dogs unlike many of the other agencies.

The biggest challenge for me and Liz is the drive to the trail-head, because it’s a very twisty mountain road, not good if you’re easily car-sick. You can get there either from the PCH or Thousand Oaks. From the north, take the Westlake Blvd exit from the 101 and follow that road south for several miles as it heads into the hills. It then turns into Decker Canyon, and just after that merges with the Mulholland Highway. Stay right on Mulholland as Decker Canyon splits off again after a mile, and then shortly after turn right on Little Sycamore Canyon Road. Stay on that as it turns into Yerba Buena Road, and after several miles of twists, you’ll see a dirt parking by the left side of the road. This is the Mishe Mokwa parking lot, and is one of the two you can use for this hike. About half a mile further on is the Sandstone Peak lot, which is an alternative starting point.

If you’re coming from the ocean side, you can take Yerba Buena Road directly from the PCH, which is just west of Leo Carillo beach. Just stay on it, avoiding the side-roads that split off, until you reach either of the parking lots.

I usually start off at the Mishe Mokwa parking lot. Cross the road to get to the trailhead, don’t take the one that starts in the lot you’re in, since that’s a different section of the Backbone. Head along the trail about half a mile, and you’ll see a side trail join Mishe Mokwa. This is a short connector trail that leads to the other side of the loop. You’ll be taking that on the way back to get from the Sandstone Peak fire road back to this parking lot. For now, just keep going straight up the trail.

The trail will lead you along the side of a steep value. On the opposite side are some great climbing cliffs, nicknames Echo Cliffs for the acoustics. Keep an eye out for a large rock the trail crosses with ‘echo’ faintly painted on it. A shout or clap from there should get some great reverberations, and hopefully won’t startle the climbers too much!

Take a look at the trees around Echo Rock and breathe in deeply. You’re in the middle of a large group of Bay Trees, with a wonderful smell. On the top of the cliffs is a large rock that seems ready to fall at any moment, Balanced Rock.

A little further on is a short section of very steep downhill, headed towards a creek. This is an area me and Liz have often worked on, since you used to effectively slide downhill in a trench. After adding some large boulder steps and drains, it’s still a scramble but should now be safer.

You’ll reach the head of the valley soon, and find yourself in a grove of oaks next to a stream which often has water even in the late summer. Another joy of this trail is the springs and greenery that flourish even when most of the hills are bone dry. It’s a great spot to rest, with a picnic table. It gets its name from the enormous boulder that rests nearby.

Walking through the gap is supposed to leave your demons behind. I always wonder if you just end up picking up the previous persons’?

Just past Split Rock is a turnoff that apparently leads to Balanced Rock. It’s signed, but unmaintained by the NPS. Me and Liz did explore it once, but it quickly became very hard to hike and unclear which route to take. It is used by a lot of climbers to get to the cliffs, so it must be possible if you know what you’re doing. There’s apparently another route to the bottom of the cliffs down the drainage at the bottom of the very steep section past Echo Rock, but it would be very rough too and I’ve never taken it.

Continue to the left up an overgrown fire road. You’ll go about half a mile, crossing below a rock formation that looks like a skull, cross a creek and then you’ll be on a clearer dirt road. This continues uphill for a while, and then emerges into a very shallow valley. In a while you’ll see a signed trail leading to Tri-Peaks. It’s about a half-mile spur trail that takes you to a beautiful set of peaks nearly as tall as Sandstone. It’s a great spot for a bit of lunch and sunbathing, with views out over the Conejo Valley on clear days.

Returning to the main path and ontinuing about another mile, you should see another small spur heading steeply up to Sandstone Peak. It’s only about 200 yards long, but involves a lot of rock scrambling. At the top is a visitor’s book and a plaque dedicated to a Mr Allen. The Boy Scouts who used to own all this land still know it as Mount Allen, but to everyone else it’s Sandstone Peak, even though it’s not sandstone at all.

After returning to the main trial, which can be tricky because the spur trail is hard to follow going down, you’ll continue on for around two miles, winding your way down the mountain back towards Yerba Buena Road. If you parked at Mishe Mokwa, keep an eye out for the connector trail, it’s easy to miss. I prefer going up Mishe Mokwa and back along this fire road because it’s pretty steep and shadeless, which in the summer means getting very hot.