November 16, 2007 By Pete Warden in Personal Leave a comment 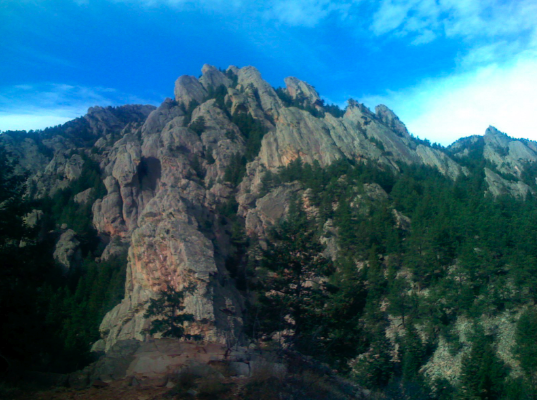 Liz joined me in Denver on the last day of Defrag, and we spent the rest of the week exploring Colorado together. We started off that evening with a visit to Pints Pub. When I first came to the US, I felt very odd visiting simulacrums of British tea-shops and pubs, they always felt like such an exaggerated, "Mary Poppins" version of the old country. I’ve been over here long enough now that I’m very happy to find even a half-decent Bangers and Mash, and the other details are no longer jarring.

Pints was actually a great place, they had an amazing selection of scotch, some really impressive draught beers, and good food. They’d got the right atmosphere too, there were the obligatory pictures of Churchill and policemen, but the furnishings, fittings and lighting were all very pub-like.

We then spent three days up in the mountains, doing some early-season snowboarding at Loveland and Keystone, staying at the Inn at Keystone. It was so early in the season that there were only a few runs open, and they were very icy, so it was a pretty challenging experience. Liz ended up getting pretty bruised and battered from falls, but we both found the martinis on offer at the Inn’s bar very soothing.

We spent the last two nights in Boulder, the hotels were packed so we ended up at the slightly tattered Golden Buff Lodge. It wasn’t a bad location, with a nice Indian restaurant nearby, but the heater sounded like a helicopter taking off when it started, there was no cable for the internet, and no sound insulation in the ceiling, so just the upstairs neighbors walking around was enough to wake us up. We still had a great time in Boulder though, we hiked from the Rangers Cottage up the Chattaqua trail on the first afternoon, and then did a big loop from NCAR up to Bear Peak and back on the Saturday.

The Bear Peak loop was tough, with about 2,300 feet of elevation gain over about four miles and starting at over 6,000 feet. The gain was concentrated in the climb up the peak itself, and the final half mile was a really steep uphill scramble. Here’s Liz coming down from the peak: 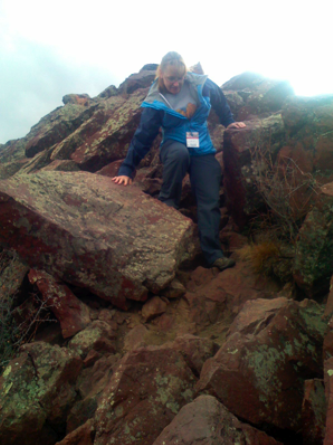 We took the Fern Valley trail back to NCAR, and that was shorter than the Bear Canyon route we took up, but involved about a mile and a half of extremely steep and slippy downhill that would have been a lot easier if we’d brought our hiking poles. The view from the top of Bear Peak was incredible though, both looking out towards the mountains and back towards Denver it was beautiful.

It was fun people-watching on the trail too; everybody looked like they could plausibly be part of the university faculty or students, and there was at least a dog for every person we saw, which made us think again about getting one ourselves. Even better, Boulder has a scheme where you can have your dog off-leash on the trails if you have a special tag hat proves it’s under your sight and voice control. I feel sorry for the dogs here in California, they never get to have any fun out in the mountains like that.